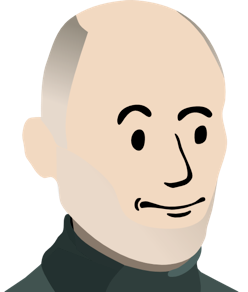 I was born in 1965, in Germany. Although this dates back quite a while, I am a digital native. Why? Because I started working with computers at the age of 14, when actually no one except blue dressed professionals worked with some rare business machines hosted in cellars.

My first computer has been a Sinclair ZX1, a stunning machine at its time, with 1kByte of RAM. No one had a computer privately, but this machine has been a "must have" for me. I saved my pocket money and collected more from my grand parents - and ordered this machine from the UK.
It has been programmed in Basic. After half a year, I bought a book named "Programming the Z80" by Rodney Zaks. Strange to say, but this has probably been the book that influenced me most in my life. It has been a tough one as it taught machine language - the missing link between the Basic stuff and my understand of the hardware.

I have been an average scholar - not interested in much except my programmings. That changed when I started studying computer science and made my Diploma (Master) at Technische Universität München in 1993.

I had worked in parallel to my studies on several jobs (sold my first games at the age of 16 - targeted for the Commodore C64 at this time) and started my professional career at a medium sized IT company in Munich. I worked on new technologies from the beginning. Actually I was hired because I had experience programming a Next station (I imported that great machine from the US sometimes around 1990 - as part of a University program).

This first employer has been too small and not relevant enough in emerging technologies, so I switched after 2 years and started a career at IBM. I finally spend 16 years with IBM and ran through all positions from a programmer to my final position as a Senior Partner and Vice President responsible for several sectors in the German consulting market (namely Insurance, Banking, Retail, T&T, Mid Market). As another job, I defined our Consulting strategy and client portfolio in Germany.

IBM has been a great employer for me - I learned a lot, and had a great time. The last 6 years of my job have not been related to technology any more, the focus moved to managing and economics. IBM has been pretty generous too - which included I was allowed to run a small IT business / hobby in parallel... In 2012 I decided to resign nevertheless. Now that some time has past, it has been because I made a career that finally took my away too far from my interests - programming innovative things and running ahead with new technology. There are always many reasons for a step like this, but it has been the most important.

The small business / hobby mentioned above is Harry's LapTimer, and it is actually what I'm working on since then.

Harry’s GPS LapTimer has been an PalmOS app back in 2006. At this time GPS based lap timing has practically not been existent. There were early developments and some purpose built boxes, but nothing worth mentioning.

The idea to automatically time laps using GPS positions developed over time. Starting with a simple manual stopwatch for my drives on German Nordschleife / Nürburgring, it became a radar warner next. The idea to bring up alerts once you approach a dangerous place is not too far away from the idea to trigger timing and start data recording like today’s version does. However it is a long way to achieve accuracy, user experience, and all the functionality one seeks quickly as device capabilities grow.

So the origin of LapTimer has been both my professional background, and my driving hobby (both motorbikes and cars). Two things came together and created something new. The reason for the name "Harry's" has its origin in my personal requirements as a driver - it is the tool I use most personally.

To mention some milestones, the next important one has been the appearance of Apple’s iPhone3G. Equipped with an internal GPS sensor, migration from outdated PalmOS devices began. As the PalmOS version’s code has been pure C, large parts of LapTimer could be taken over directly, the user interface and overall control flow were new development. As the internal GPS’s accuracy of both the 3G and 3GS iPhones has been pretty low, the appearance of external GPS devices has been a further step forward too. Adding internet access to shares sources like the tracks database, online racing expanded functionality clearly beyond anything that could have been done in the old PalmOS world.

From an user’s perspective the probably biggest milestone has been the addition of synced video recording plus the ability to overlay this videos with data recording from all kinds of sensors like GPS and OBD II. LapTimer has been the first app to feature something like this and has been copied several times since then.

Latest steps have been integration of external cams, addition of professional sensors, and a port from iOS to Android.

Although LapTimer receives most of my time today, it is not mainly to make my living. It is more of a passion and dedication than an economically driven activity. I believe it is fair to receive some compensation for this work, but I want to do fun things. That's the ultimate philosophy and probably the reason I continue developing a product that could be considered "finished" for a long time already. Being able to do it like this is luxury, and I'm absolutely aware of this!

LapTimer development has always been evolutionary and incremental. Features were added based on ideas and requirements brought up by a large fan community. Releases and updates were many. Features that proved to be too complicated or poor were reworked to not only be state of art but ahead of everything else. Giving evolution a chance and having the ambition to regularly bring up completely new and innovative features has been the major principles in the past, is the mission today, and is my plan for the future.

Harry lives with his lovely wife Monika, his son Felix, and a smooth collie in Cologne, Germany.

PLACES I HAVE BEEN:
Europe, U.S.A, China

IMPORTANT:
Fun in what you are doing
Fast Internet connection
Accept other's way of living